We at Drago Publisher celebrate Benjamin Franklin as an independent publisher and iconic street art symbol today- February 17th- the day of the first publication of his periodical, “General Magazine” (1741).

276 years ago today America Founding Father Benjamin Franklin began publishing his “General Magazine and Historical Chronicle”, which commented on politics and was the first monthly magazine of its kind.
It is not surprising that Franklin’s is a recurring image in street art as his face is also the face of the one hundred dollar bill. However, Franklin’s history suggests he is admired by street artists for other reasons.

Franklin was an autodidact who left school at the age of 10 and quickly became  a jack-of-all-trades. The son of a blacksmith and one of seventeen children, Benjamin is the quintessential picaro who nimbly bounced to the top of the social ladder. By the end of his life, he became known as the man who dined with five kings. Easily Ben Franklin is synonymous with the American Dream, by many he is considered its founder.

In his prime Franklin was an author, diplomat, founding father, inventor, developer of the lending library and the fire brigade, printer, postmaster, and scientist. 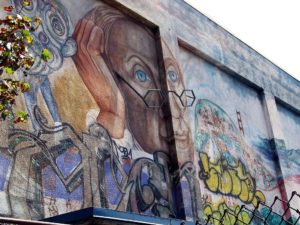 Before turning to politics, the legendary Philadelphian statesman got his early start as a street performer. That’s right, Ben had a street act in which he performed his original songs and poems which slammed politics and government policy. He sold sheets of his poetry in the Philly streets—back when they were cobbled.

At the age of 12, Franklin became his brother’s apprentice and learned the printing trade from him. When Ben was 15, James founded The New-England Courant, the first truly independent newspaper in the colonies. Denied the chance to write for the paper by his brother, Franklin took on the voice “Silence Dogood“, a middle-aged widow, whose letters became the talk of the town. Franklin was always a stout advocate free speech. In 1722, his brother was jailed for publishing material unflattering to the governor, Ben took over the newspaper and had Mrs. Dogood proclaim: “Without freedom of thought there can be no such thing as wisdom and no such thing as public liberty without freedom of speech (Cato’s letters).”

Franklin was jailed more than once for publishing inflammatory material.

Despite his involvement with the American revolution, Franklin typically took anti-violence stance. It is known that despite his anti-Tory sentiments he frowned upon the Boston Tea Party, considering it destructive. Today, Franklin’s hometown of Philadelphia is known as city with a grim rate of violent crime. In 2005, the city launched “All Join Hands: Visions of Peace” a year-long project to combat youth violence which offered painting workshops and town-hall meetings where citizens of all backgrounds could tackle the issue of youth violence together. The eyes of Franklin, emblazoned in a mural across the face of Benjamin Franklin high school, testify to the project’s immense significance to Philly residents.

Throughout his life, Franklin was a formidable publisher, printing, to name a few of his publications, The Pennsylvania Gazette, Die Philadelphische Zeitung (the first German language newspaper in America), Father Abraham’s Sermon (also known as The Way to Wealth).

As a mastermind of the American Revolution and pioneer of the American dream, Benjamin Franklin fits right into street culture and its main drive—combating the system through free speech. Today, his face dominates street art in Philly and around the world.