When did you start doing Street Art? What prompted you to start your research?
Everything happened between the end of the last century and the beginning of the new one. I had already been experimenting in the graffiti world for years. In 1998 I traveled to New York, to visually stuff myself with tags, flops and throw-ups. I’ve always had a sweet spot for the New York graffiti writers’ style, as growing up I would leaf through “Subway Art” every day, something I still do to this day. I had to go and see the graffiti in those wild lands where they were born 30 years before and, as soon as I had the chance to take advantage of a friend’s hospitality, I flew overseas. Of the sacred monsters listed in that book, by then there was almost no trace left, except for some obvious references in the letters of the new generation in the Big Apple. Of those punks that impressed me the most, I had never really heard of many of them before. I won’t name them all, otherwise it will take forever, but I was very luck to be there when graffiti writers of the caliber of Peek, Revs, News, Skuf, Earsnot, Sace, RK, JAone were in full activity… Besides discovering many new masters of lettering, one day, in one of my endless walks, I came across a small sticker with the black-and-white stylized face of an iconic wrestler from the 1980s. Underneath it, in a beautiful white and blue font, a sort of an imperative order read: “OBEY”. I couldn’t resist and I tore it off, thinking “Holy shit, who’s this dude?” … It makes me laugh to think about it: I believe that today even the rocks know who Obey is. Anyways, I had been hand-making stickers for a couple of years at that point and coming across that specific one motivated me even further in embarking on that path that shorlty thereafter would dramatically change the world… I started my research when I was 12 years old. I don’t know what pushed me, but I got so deeply involved that it went from being a game to becoming my job today.

When did you understand that this art form would be with you for the rest of your life, and how did you react?
I think that certain things just happen. You shouldn’t try and make sense of everything – just follow your instinct. I’m not one of those who was “born knowing everything” or with the gift of knowing how to draw from an early age – actually I was not that good…In fact I kind of sucked at it and I couldn’t care less about drawing, also because, when you’re young, others will think you’re skilled only if you can perfectly copy somebody else’s drawings, such as Snoopy or Mikey Mouse. That’s something I never learnt to draw. One day, I was probably 8, I was at my friend’s Tommaso: we were drawing and I made a series of strange armored spaceships, very detailed to the tiniest piece. They’d sketch them our like that naturally. He stopped and asked me where I had copied them from. When I told him I was inventing them, he went nuts and complimented me a lot. However, in those days, I’d rather do anything than drawing: running, climbing trees, rolling right and left, jumping as high as I could, learning to walk standing on my hands and fighting with my little brothers while we watched the cartoon “Tiger Mask”. All these things would come in handy later in life. Then, one day, I came across graffiti on the street and everything changed: I started drawing and I’m still trying. Maybe one day everything will change again, and I’ll start doing something else…

Which artists – contemporary or of the past – have influenced you and in what way?
There’s so many of them, but I will try and distill them into 2 names.
As a contemporary artist, without the shadow of a doubt, MQ. He has an unmistakable style and an unattainable attitude. Every time I see a sticker or a tag, a flop or a piece, it immediately makes me want to go out and interact with the streets. As for an artist from the past, Giuseppe Capogrossi:, no doubt: his mastery and dedication to the sign have always impressed me. Every time I see one of his works, I feel like painting myself.

In your opinion, why is the public now so open to graffiti and muralism? What has changed in these last years?
I actually don’t believe that the public in recent years has opened up towards graffiti…quite the opposite. In fact, it’s certainly very open towards muralism (as it’s always been), but before, in order to paint a public wall, you had to be a multi-award-winning artist as well as an academic of the Republic; today it’s enough that you know how to move well on social networks and you can hook with a young journalist, an industry blogger or the curator who’s hot at the moment, and the game is done: all the blind facades in the outskirts of the world will be available to you. What has changed in recent years? The Internet has arrived, with all its pros and cons.

Some street artists like Banksy or Blu have had an unprecedented success, and we do not know the name or the face of either. They seem almost like super heroes … In your opinion, what is their secret ingredient and why are they so successful with the public of each country.
I’ll be frank: the truth is, I’m not much interest in talking about the whys or the wherefores other artists have obtained their unprecedented success. I am very happy for them and I like them a lot, sometimes more, others less. Without a doubt the choice to remain anonymous and to continue to work illegally was a winning choice, a bit like, afterall, Jaone had already taught us…

What’s the difference between making a “legal” and an “illegal” work? What changes and what are the pros and cons?
Well, they’re two very different things. When you make a legal work, you are put on a pedestal, you have all the materials you need at your disposal and all the time you want. Most of the time you are served and revered, as well as protected and paid. Also, certainly some newspapers or magazines will talk about the finished piece. When you work illegally, the materials come out of your pocket, you risk being insulted, assaulted to the point of having to come to blows, in addition to the risk of being stopped by the guards and, in the worst case, pressed charge against, and be fined a large amount. You work uncomfortably and with little time, so you have to be precise and fast, a bit like a Ninja. It’s possible that the people who come to congratulate you when you work legally are the same ones who will attack you if they see you working illegally on the street.

Tell us about the big yellow face popping up on the walls of Rome. Now it’s your trademark, the city went crazy, everyone wants it, and everyone wants to know more. That cryptic look won’t leave you feeling indifferent … How was the idea born? And, above all, from your point of view, why is it so attractive? What chords does it strike in your audience?
The Ciccione [Fatty] was born in the late 90s from a drawing extrapolated from a photograph. I’ve always used it, sometimes more, sometimes less over the years. Since 2014 I decided to do an experiment: try to condition people, condition them to such an extent as to turn it into something familiar at first, and then somehow manage to have them like something that, in fact, at first glance, was insignificant or even repulsive. Let’s say I decided to complicate my life and pose a limit to myself. Many people, including my grandfather, think that it’s a young stocky woman; others call him “Tha Chinese” or “Tha Potato”; others still call him “big yellow face”, but he is certainly all of these things together. Everyone is free to see him and call him as he wishes: for me he’ll always be “the Fatty” [Ciccione]. I don’t know why, nor whether people like it or not, but I know that during my experiment throughout these years I put it on the street, and then put it again in several (in my opinion strategic) points of the city where anyone living in Rome passes by several times during the week. Perhaps by dint of seeing it again and again, ad over again, it has become a sort of a family member for those who notice it, someone to even say hello to with a smile, as they pass by: “hey, hi Fatty”.

If tomorrow you were to undertake another book with Drago, what would you like to work on?
I would like to be able to make a book focused exclusively on The Fatty and the streets of Rome.

What would you recommend to a young guy who wants to be a Street Artist when he grows up?
Go out!
Go and do what you want, where you want, when you want. 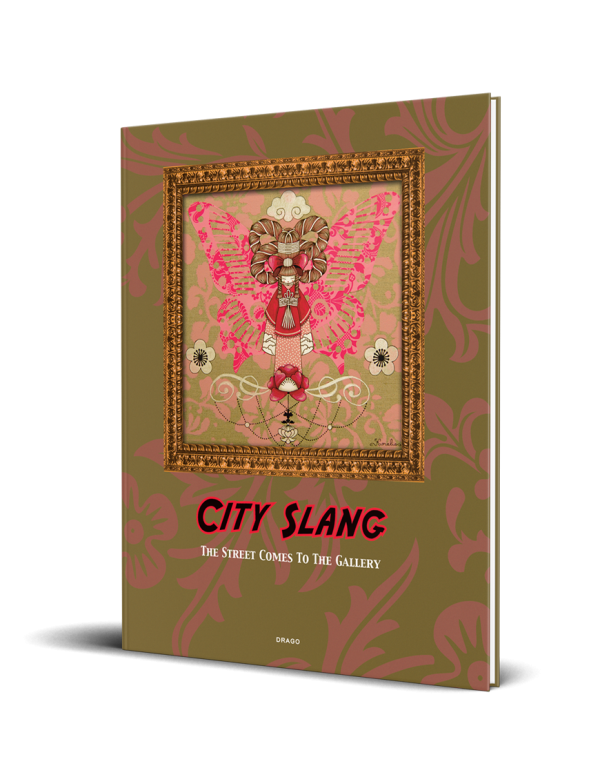 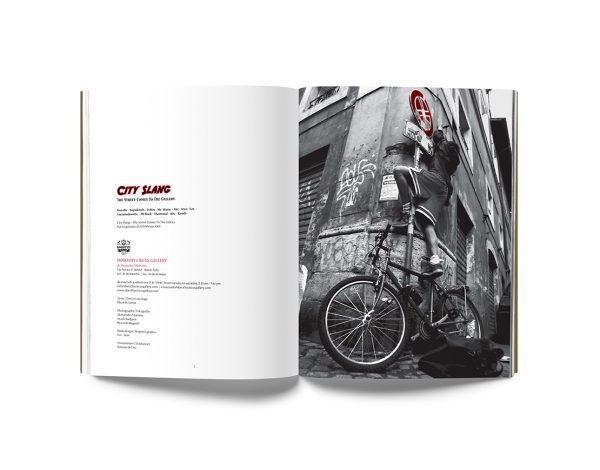 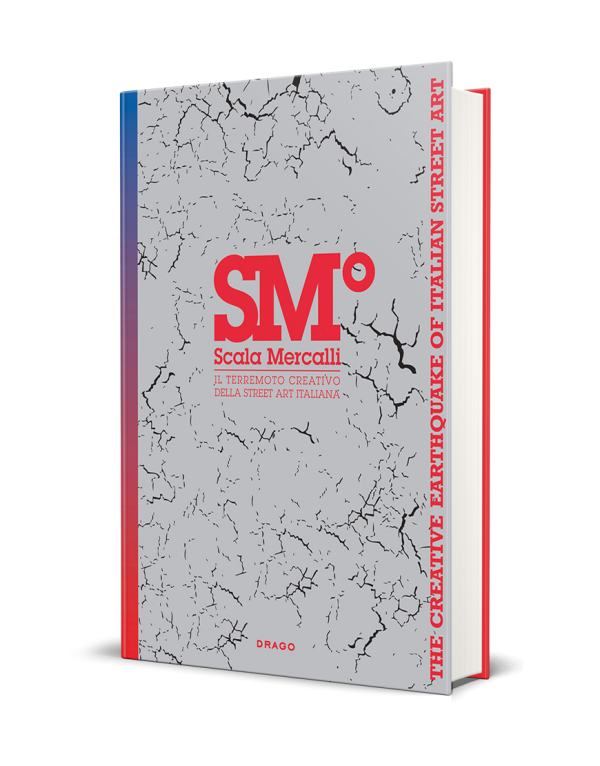