Shepard Fairey understands that the fundamental job of the artist, to construct a hyperreal world around its audience, is precisely the same job as that of the politician. The construction lines of an image which is pulled up seamlessly in one go as we look an an advertisement or a campaign poster. Our response is built into it.

And this is a response which Shepard Fairey has been playing with for over three decades. A worthy repertoire he is now touring across key Street Art festivals and venues worldwide.

In ‘Facing the Giant: Three Decades of Dissent,’ Shepard Fairey continues his iconic giant theme. And yet of course, with the work of Shepard Fairey, this giant is decentralised from its context and so we are never entirely sure whether it is a giant of a political tyranny, media control, a beast driving forward the mechanisms of capitalism.

Or, quite simply, the beast of André the Giant, a media star during the 1990s who size and proportions meant he was touted as a horror show.

Shepard Fairey’s used images of this man as the new celebrity of a sticker range he plastered over the streets of South Carolina, when his career first began in the 1990s. Perhaps this was all a great commentary on the phenomenon of demonisation, how our political, social or racial others, were not deserving of the demon accreditation after all.

Perhaps our demons were not to be feared. A way to be politically savvy, by not aping, but mimicking. A way to consider and to interrelate a vacuum of power, with vacuums of meaning, so people were wondering dumbfounded in the streets trying to figure out the purpose of the sticker. Could it really be that it was selling them nothing?

Or perhaps it was all just a joke.

Shepard Fairey launched ‘Facing the Giant: Three Decades of Dissent,’ during the Grenoble Street Art Festival in France earlier this year. Since this launch date, the exhibition has travelled to Brooklyn’s, Beyond the Streets (here our article on the exhibition) and Paris’, Galerie Itinerrance.

Shepard Fairy will now bring the exhibition to Los Angeles, from the 10th of this month, the official opening being the 9th Nov 3pm – 6pm at Over The Influence Gallery, 833 East Third Street, Los Angeles.

Through the exhibition, Shepard Fairey launches several new pieces of work and so it is a rare opportunity to see a great variety of Shepard’s work over three decades. The forms vary and yet always does he allocate a special consideration to the response of the audience.

Through his most recent, ‘Obey,’ line, Shepard reduces the advertising world to its bare mechanics. To show only the imperative heart which directs images, campaigns and the act of advertisement by ripping out the veneer from the advertising world. To leave only the imperative structure, which is the directive to vote or to shop or to watch. To do this, Shepard places the most imperative grammatical forms, the exclamation mark and the arrow around the familiar face of André the Giant, our familiar media ad absurdum star.

The sharp lines of the exclamation mark and the arrow mimic the style of art under the Soviet Union. The constructivists who saw art as a constructive element in the building of society. And yet only to show the mechanism of construction, the fundamental centre of propaganda, this is Shepard‘s goal.

And yet, of course, Shepard’s work is usually a way to highlight this directive contextualisation of an image. Whether it is a show we are being encouraged to watch, or vote for the next presidential candidate. The way art directs our response to it is Shepard‘s concern.

And yet, not always does this mean that the skills learnt through mimicry do not have to be put to use. In fact, Shepard Fairey’s most famous piece is a foray into such directive forms of art. A portrait of Obama fused with the colors of the American flag. The result is that Obama, who was a radical choice when Shepard made the piece, now looks American, patriotic and a good guy to vote for.

‘Facing the Giant: Three Decades of Dissent,’ will run at Over The Influence Gallery, 833 East Third Street, Los Angeles, until the 29th December. 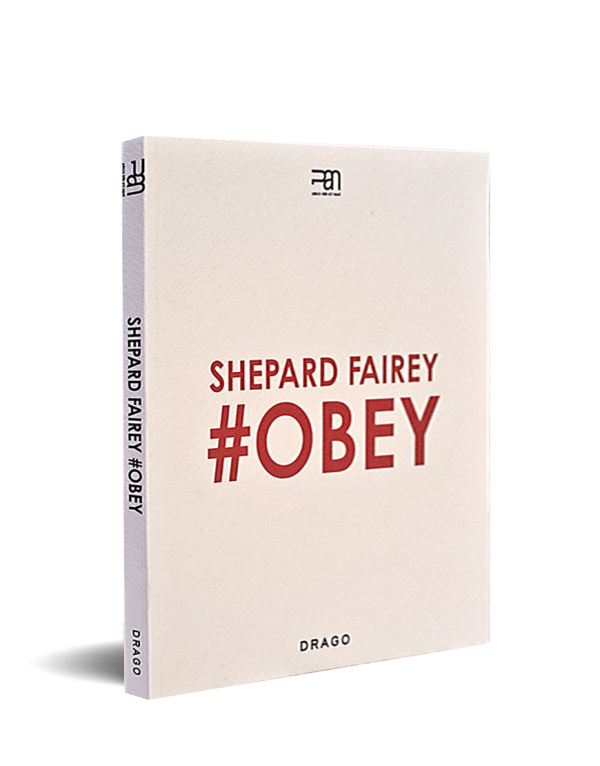 END_OF_DOCUMENT_TOKEN_TO_BE_REPLACED

IF YOU FALL, PICK YOURSELF UP | THIS IS SKATE CULTURE

END_OF_DOCUMENT_TOKEN_TO_BE_REPLACED

WE ARE VANDALS | CONTEMPORARY CLUSTER