The Magda Danysz Gallery in Shanghai is pleased to present the first exhibition of Felipe Pantone in the city. Presenting all new works, created for the occasion, the exhibition highlights the latest research of the artist. The works almost seem to fit into the walls of the gallery, and blend into the space, integrating perfectly with their environment.
The exhibition will be open to the public from January 12th until March 16th.
Dynamic, powerful, marked by a visual explosion of a certain brutality, Pantone’s style is reminiscent of Italian futurism in its desire to exalt the modern world, machines and speed. His work is firmly in line with optico-kinetic art, but he revisits with the look and the sensitivity of a child of his time, taking things back where Vasarely, Le Parc or Soto had left them.

« I try to convey on the world in which we live: the circulation, the flow of information, and the cultural exchanges. I think my job belongs to the present, I’m an internet kid” Felipe Pantone.

Felipe Pantone (born in 1986 in Argentina) is considered today as one of the great figures of street art. An innovative artist, he has gained an international reputation in the world of Street Art, paving the way for several collaborations around the world, including his recent exchanges with Futura. A prolific artist, his creations can be seen on the walls of the world: from the Mesa Contemporary Arts Center at the Long Beach Museum of Art (United States) to the Palais de Tokyo (Paris, France), Mexico, Japan, Portugal, Palestine, Italy or Australia. Only 30 years old, he has already participated in numerous large-scale museum exhibitions, including “Art From the Streets” in Singapore, and “Beyond The Streets” in Los Angeles. In his works, Felipe Pantone questions the society in which we live and his propensity to place new technologies at the center of our daily lives. Crossing the conventional barriers of Street Art, Pantone stands out as an artist in its own right. Influenced by research on the color of the Venezuelan artist Carlos Cruz Diez, he succeeds in fusing geometric forms, chromatic work and elements of contemporary modernity to create a singular universe where the use of bright and metallic colors, contrasting with the omnipresent duo black and white, reinforces the psychedelic effect of the compositions. Playing on visual overlays, flows and abrupt breaks in rhythm, approaching the work of a Ryoji Ikeda, he questions the speed at which new technologies evolve and make us dependent on an overabundance of images and alienating symbols. 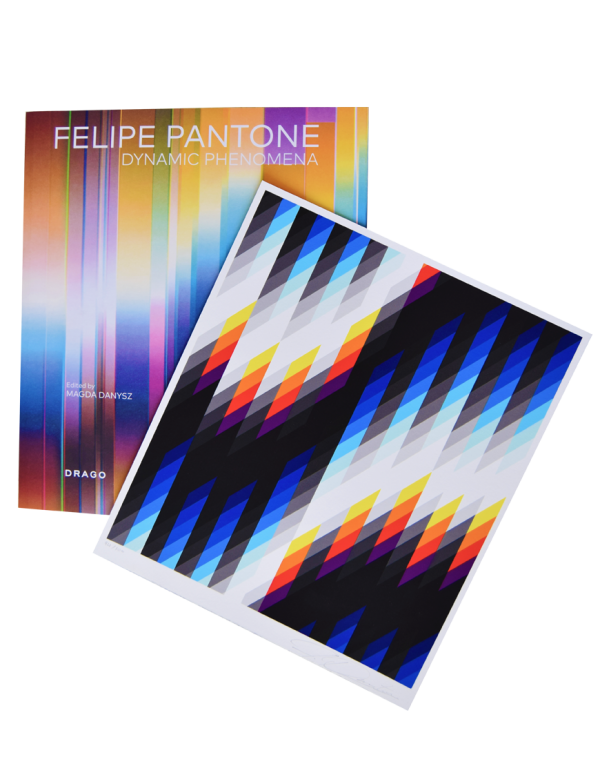 THIS IS LOS ANGELES (SIGNED)